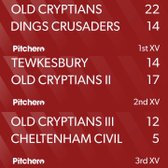 It’s been busy at the club these last few weeks. All sides have started their league campaigns with at least one win under their belts and many of you are now back in the swing of Saturday rugby.
However, during this so called ‘new normal’ some players have been slow to return, and a mixture of this, injury and general unavailability might have had an influence however the lads still managed to put out 3 teams on both occasions winning 4 of the 6 fixtures so far.

However, more players returned to the fold for the second round of league fixtures week and their presence helped in securing a clean sweep of wins across the senior sides. The 1sts entertained Dings Crusaders 2nds who’s first team play in the national leagues and who were sure to be a challenge. They were big, well drilled and like the opponents last week, most of them looked more at home in a police identity parade rather than a rugby pitch.

But after putting us under severe pressure for the first 20 mins, a performance of grit and determination saw the lads turn the tide and come from a 0-14 deficit to record a bonus point win 22-14. Coach Worrall was delighted with that result and the other victories from the 2nds and 3rds and was looking forward to an evening of celebration before he remembered he had to work.

The 2s continued their league campaign with a trip to Tewkesbury and a match against their first team. This is another club whose fortunes have dwindled in recent years and a close game resulted in a 14-17 win for Bennett’s boys whilst the thirds won again with their brand of fun and noisy rugby with a friendly against Cheltenham Civil Service and a score of 12-5. New captain Harvey Williams has already made the thirds a popular team to be involved in.

In other news. Congratulations to Chris Price, the club’s favourite solicitor and prop who ran the London marathon last Sunday for a cancer charity called ‘Hope For Tomorrow’. He posted a record time (for him) of 4hrs 54mins and all respect to him for taking on the challenge specifically to support others. We all know someone who’s life has been affected by cancer and this is an excellent cause to support. If you’d like to support Chris, you can donate at the following: uk.virginmoneygiving.com/ChrisPrice38

Congratulations also to Luke Stephens who has made the move from Cryptians to Cinderford to further his playing career. A longtime favourite, Luke is an exceptional player, and he will be remembered for many things, such as his no nonsense approach, great rugby mind, winning attitude, hard tackling and super fitness (not to forget his yellow card collection). Cryptians loss but Cinderford’s gain, and we all wish him well at his new club.

Also, another favourite Euan Brice, finally won an ‘Old Farts MOTM award’ in the game against Dings whilst the following players all made their first team debuts over the last few weeks. Well done to Anare Dresa, John Zecca, Johnny Pym, Inoke Tunidau, Liam Downer, Josh Kemmet and Olly Clark. Also a warm welcome for the return of half back Jack Medcroft who played for Cryptians a few years back when we had our successful cup run ending up at Kingsholm. He was a player/coach for Cheltenham Saracens and also played for Cats 7s team and played in Dubai. Finally, the debate of whether first team centre Conor Jones missed a tackle in a competitive match recently continues.

Moving on and a plug for the junior section and their Halloween party on Friday 29th Oct from 6:30pm – 9:30pm. Tickets are available at £10 for a family ticket, £4 for adults and £3 for kids. You can expect an evening of fun and laughter with games, food, a disco and prizes. All are welcome and fancy dress is preferred although some of the senior front row boys can come as they are.

Rugby this weekend sees the continuation of league rugby with all sides playing in their respective leagues. The 1sts are off to Frampton Cotterell. Our first XV’s have not met however our 2nds came up triumphant in a fixture last season (2019-2020). Back in the day we were always well matched, and I remember many a close encounter. They like us are currently one win from two in the league so it should be an interesting match.

The 2nds are at home against another first XV, this time Bredon Star and I always remember these as a sociable lot after the game although I know little about them now. They like us are one win from two and should give us a solid game. By the way, if you’ve ever wondered why they are called Bredon Star - A bit of history for you; The ‘Star’ is a nod to The Star pub in Overbury (Nr Bredon) where the club first started as Sunday pub side, but when the pub closed in the early 90s the club relocated to the Royal Oak pub in Bredon and renamed themselves Bredon Star. Since 2009 however their home has been Bredon Village Hall.

Harveys Thirds travel the short distance to Gloucester All Blues and will be confident of another win.

All 3pm kick offs and support is always welcome.